Inside a Maverick Mind: Cameron Bishop from Distinctive Stone

Cameron Bishop is many things. So far, he’s a watchmaker, viticulturist, inventor, and businessman running seven companies with his wife. There’s no knowing what this modern renaissance man will do next.

Hailing from a long line of jewelers – Wallace Bishop Jewelers, to be exact – his mind and drive couldn’t quite be contained within the family’s multi-generational establishment. Having spent his childhood building generators, trailers and all kinds of things in the shed of his father’s dairy farm, Cameron developed a knack for solving problems of all kinds. This, along with a dedication to service, formed a crucial foundation for his business success, which began to pick up once he left the Bishop business.

“I’m probably the black sheep of the family, the one that didn’t stay in the business. I have 25-30 years retail service experience over the counter, and have always been focused on providing great service. About 20 years ago I started branching out. I’m the same as my father, we’re very driven, so I needed to leave and do my own thing.” 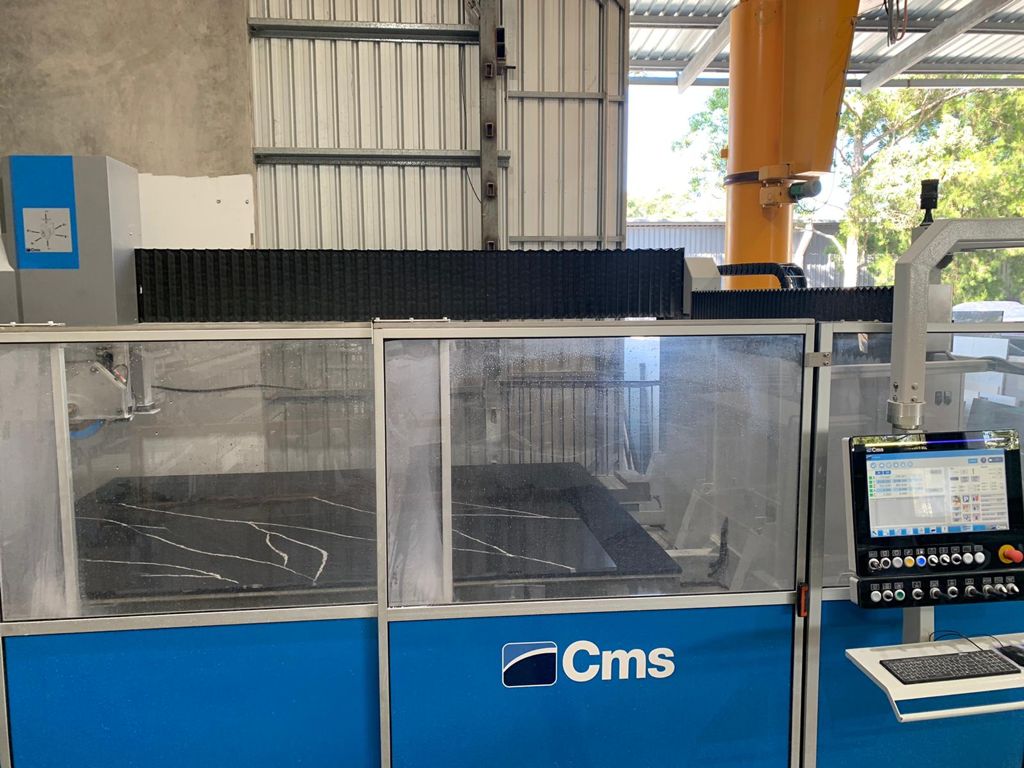 The first thing Cameron did was to establish a flourishing real estate office. That was only the start of a string of commercial successes, which would eventually lead to a partnership with us.

The second, third, and fourth came unexpectedly. After buying an apartment and having several neighbors complain about seeing Mr and Mrs Bishop’s laundry drying over the balcony, the couple went in search of a laundromat. Finding none nearby, they decided to create one. The venture grew to become a Queensland giant, affording the owners an opportunity to live the kind of lifestyle they’d always wanted.

Buying a beautiful house with a vineyard, Cameron and his wife moved out to the country and learned the art of viticulture. That too, turned into a venture. Gold Coast Hinterlands estate expanded to include a restaurant, then a wedding venue followed. It was at that point that the non-linear path to Distinctive Stone began to unfold.

“We noticed there wasn’t any nice glassware to serve our wine in, so we decided to make our own. My son went to America and studied hand engraving with the masters. When he came back, he started working on our glassware. After a while, he realized he didn’t have the precision he wanted, so we got a laser engraver. People started asking us to do laser engraving for headstones because you can get a lot more detail through that process. So we started doing headstones, which led to Distinctive Stone.”

Back then, Distinctive Stone was an established business up for sale, complete with machinery. The Bishops acquired it and went to work realizing their Stone requests. They quickly found the old machinery inadequate and discovered our CMS machines quite by chance. Seeing that the precision and capabilities lived up to expectations, a Brembana Speed 24 was secured in the middle of 2019.

With it, the firm has been able to create a whole variety of products, from high-quality benchtops to art pieces. The Speed 24’s bed has even accommodated semi-precious slabs that aren’t often machined at such large sizes. That, as Cameron well knows, doesn’t mean they can’t be.

“There are some semi-precious stones like amethyst, aquamarine, and onyx, that are more for arts formats. There are a few international suppliers that will supply a 30mm slab in these stones. I did one for a private client which went in their bathroom, with lighting that made it look pretty and everything. We used the same stone tools and went with a slower and more conscious cutting process. It’s not something you do with a time limit.”

With a brand new Brembana Kosmos now added to the factory, Distinctive Stone’s team will be able to do even more. The new addition was ordered last year, but due to 2020’s wild events, there were some hurdles to overcome. Our Managing Director rose to the challenge, and, collaborating with Cameron, planned and executed the installation. The fruitful partnership earned admiration from both men, whose minds function on a very similar wavelength – as does our new technician’s.

“Pierre is seriously one of those sorts of people that thinks ‘hang on it needs to be right, not left’, and he’ll make sure it’s done correctly. There were some issues that he was trying to correct in machinery, and he said, “Cameron, you’re not getting it until I get it right.”. I’m the sort of person that will give you a solution. That’s why I sat with him and needed to understand what was happening. I needed to see exactly how it worked and how it came together. There were COVID-created delays and my contracts weren’t waiting to be filled and I’m not the kind of guy that stops. After Pierre left, he left us with Ardi, the new service technician. Ardi was fabulous, a real chip off Pierre’s block. He stayed and made sure that everything was done right and that the machine was ready to go.”

Now that the Kosmos has reached its final destination, the potential to produce more efficiently is in the capable hands of Distinctive Stone’s team. Always thinking of ways to improve, invent, and streamline, Cameron already has plans in place to run an even tighter ship.

“By the time I’ve implemented everything that I want to implement, the combination of the saw and CNC will have made us twice as efficient.” 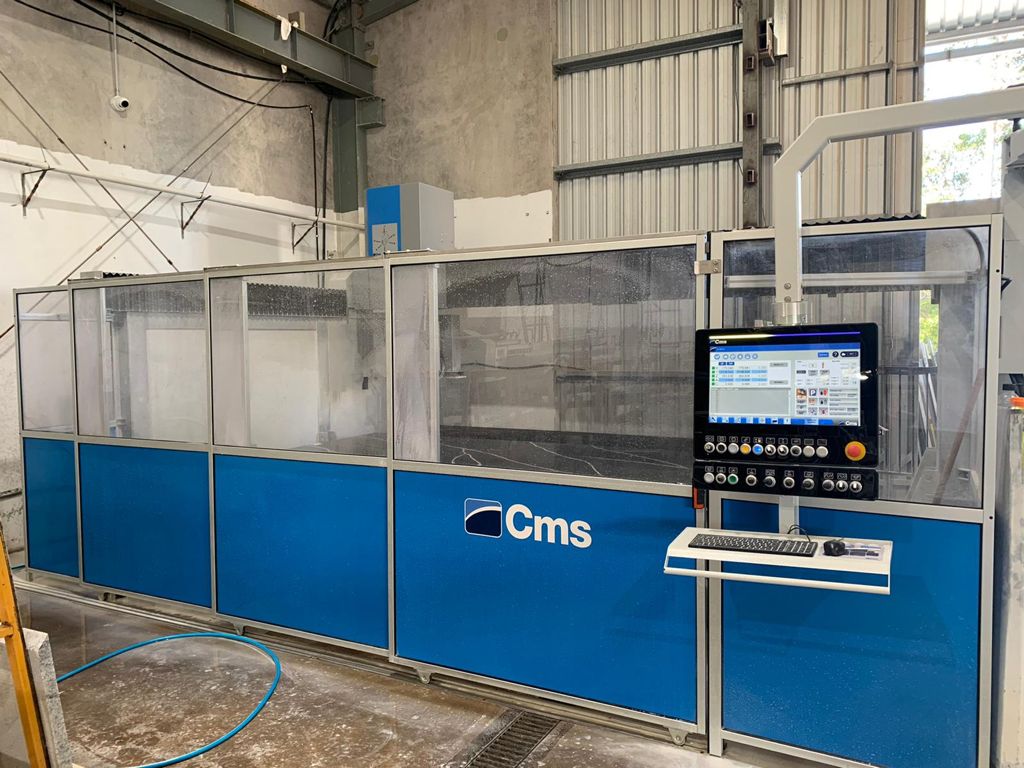 Now enjoying a boost in lean manufacturing and with a team of like-minded employees to take care of orders, the   maverick is free to work on his own projects. Always making changes where they make an impact, he’s not shy about doing things his way. Nor should he be, in our opinion.

“I might be just a stonemason today, but tomorrow there might be another opportunity. And I need to say: how do I do that? In this industry, they say you can’t do it that way and I say ok thank you, and go about doing it my way. It doesn’t matter if I fail, I’m going to keep going. I’m going to do it my way and if you guys want to follow, you’re welcome to.”

Want to know a success secret? Learn to read the signs

The way of the inventor may not be understood by all, but it fulfills those brave enough to pursue it. While the machinery works away, Cameron is tinkering with new devices and systems that help cut down time, steps, and muscles to achieve all-round improvement. One day, they might even be on the market, if he so chooses.

“I’m lucky because I have sufficient time on my hands and spend it inventing silly things like a special A frame that’s fitted into the back of a van for loading and unloading slabs.”

It’s almost as if everything he touches turns to success. We couldn’t help but wonder what the secret is to attaining the fulfilling life he’s created for himself and his family. So we asked.

“When luck presents itself, you need to be ready for it, then take action. My father has always taught me that you are only as lucky as hard as you work.”

There you have it. If you’re prepared to do the work, be of service, and keep your eyes peeled for signs along the way, the road to your own fulfilling life will reveal itself. Count on us to be there for all manufacturing ventures, every step of the way!