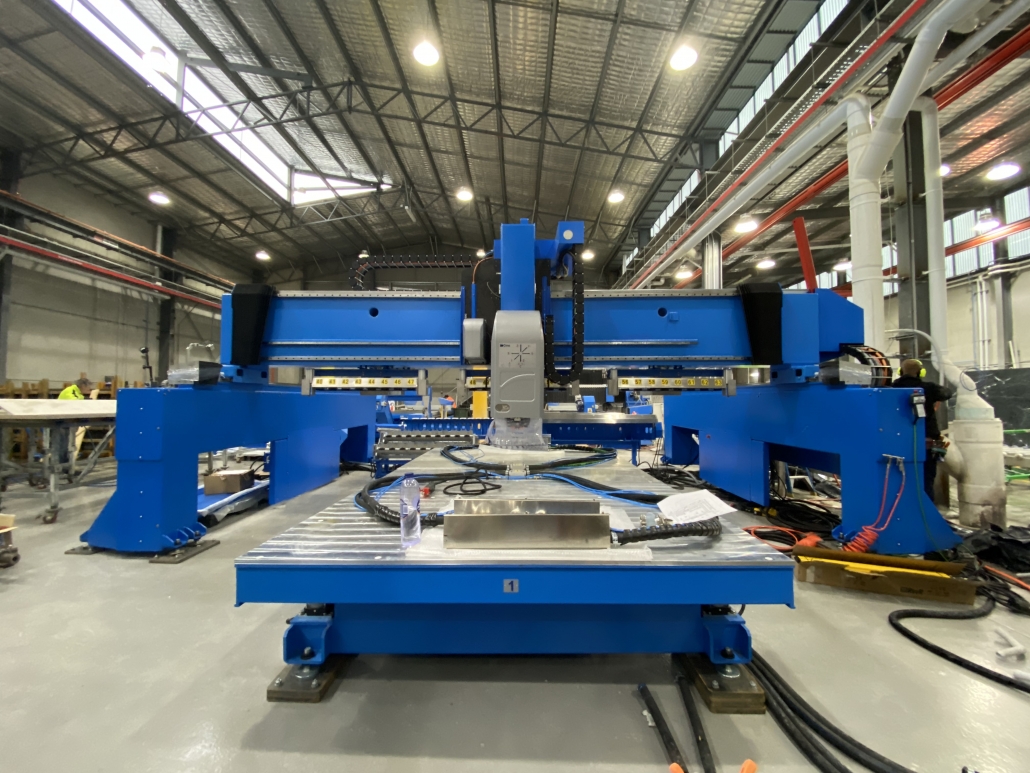 Pacific Stone’s new customised TR is a highly advanced stonework powerhouse like no other.

Daniel Zovko is a familiar name to many in the Stone industry. Making waves ever since he went from tiling subcontractor to Director of  Pacific Stone, he’s earned a reputation for doing things differently.

“I started in the tiling industry when I was 17, got sick of that and then transitioned to Stone back in 1997.”  he tells us.

After working for a few companies in the ACT for six years, Daniel decided to start his own venture, joining forces with his current business partner Ante Dzaja.

From day one, their aim was to reduce inefficiencies in every possible way. Through trial and error, they learned that customisation was a necessity in the workshop if they wanted to make equipment work for them, rather than working for it.

“When we started out I hated tedious tasks. I thought, “there must be a better way to do this”. We had an automated saw, but out of frustration, ended up getting a CNC in 2004. We started customising machines and found there weren’t many companies that were customising. Then we met Pierre and Steve and bought our second waterjet from them.”

The Brembana Easyline has been a major asset for the firm. Cutting slabs for benchtops and large-scale projects, it’s constantly in use during operating hours. A Brembana Smartline was added last year, purchased for cut-outs and detail work. Elements with 3-5 minute cycle time are executed on the new three-axis machine; which, being from the same brand as the Easyline, makes for a highly efficient cutting system.

How to get what you want out of hi-tech machinery 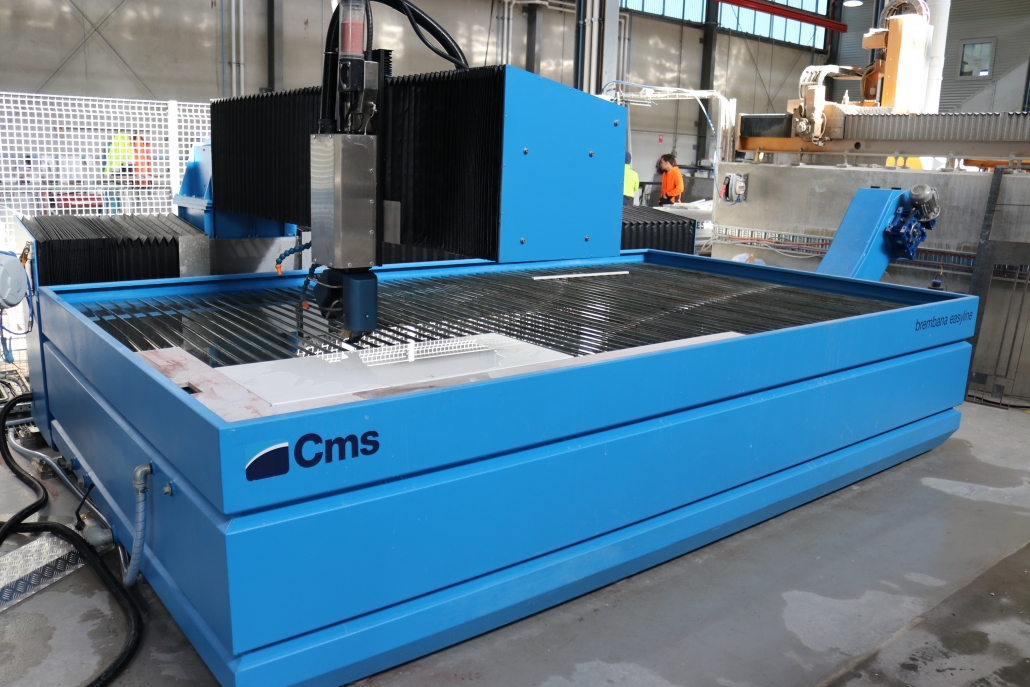 The CNS Brembana Easyline was the first of Pacific Stone’s CMS acquisitions.

Only the best machinery makes it into Pacific Stone’s immaculate shop. Often, getting what they want entials collaborating with forward-thinking companies like ours, who provide tailor-made equipment that does exactly what this professive firm wants.

The most recent collaboration between Pacific Stone, our team, and our partner CMS has resulted in a modified Brembana TR, which can do much, much more than the average machine.

“The new TR, it’s probably one of the most advanced four axes in Stone. We might have gone overboard…it’s got rotating tables and a 30kw electrospindle that’s got twice the power of a traditional Stone CNC and tool racks with 83 tool positions.”

With the TR, the aim was to provide a machine equipped with a massive range of functionality. We rose to the occasion and even went as far as altering the aesthetics, at Daniel’s request.

“They even painted the machines blue for me. The reason why we do that is so we can see that it’s clean. We’re trying to keep a very clean, tidy workshop. We want all our machines to be clean and dust-free at the end of the day.” 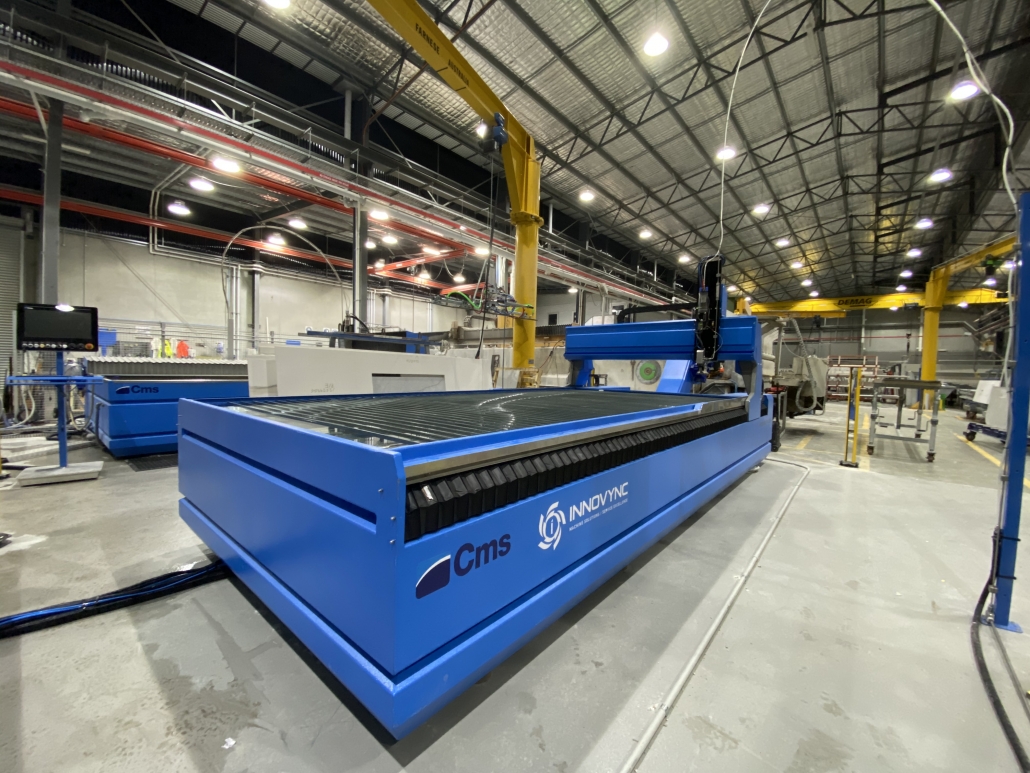 Silicosis prevention has always been a major concern for Daniel and his team. Every change they make is done with an eye to keep the air and space clean; providing an optimal environment for production. Having invested time, energy, and money into understanding the issue and protecting employees against the deadly disease, Pacific Stone is setting a high standard for the rest of the industry.

“We’ve been leaders in the industry for silicosis for years. We’ve got a dust-booth, a specialised cutting room where the guys are working. We’ve been testing our air quality since 2017. Everyone started doing it after the scare in Queensland. We’re trying to set a benchmark and are doing our own thing based on our research.”

A range of procedures and unique additions is in place at the ACT facilities. Safety practices are something that all observe without exception. From the workshop floor to employees’ interactions with raw materials, every element is addressed so as to minimise exposure to silica dust. The difference, in comparison to average shops across the country, is quite a big one; as visiting technicians find out.

“All our staff wear power respirations when they do any form of cutting and are at risk of dust exposure to silica. We scrub all the floors down on a daily basis with a scrubbing machine and we’ve applied an epoxy floor coating with an anti-slip treatment (P4 rating) throughout the factory. Most people that walk into our shop can’t believe how clean it is. Most workshops we go into are full of sludge. With us, the whole factory has a drainage system designed into it so we’re not walking in water. Technicians come and say, ”wow, this is state-of-the-art, I’ve never seen anything like it.”

As CMS technician Nikolaos Mourvakis who installed the TR said, “I’ve been to hundreds of stone factories around the world and Pacific Stone is in the top 5 clean and dust-free in the world.”

Safe to say, he executed the job to perfection – alone.

“Innovync did good, the installation went      well, one of the guys got locked down in Sydney so it took a bit longer, but we got there,” says Daniel.

What goes around, comes around

When lives are at risk, no financial sum is too excessive. That’s why every Pacific Stone employee is tested annually, with CT scans and a full medical examination.  Daniel and Ante value their staff members and are well aware that without their help, the business would not have grown to where it is today.

“Pierre has great ethics, he’s honest, and he’s got a great way of running the business, which is why I like working with him.’

Pacific Stone’s efforts have earned them awards and a place among silica task forces, both State and Federal. They urge officials to rethink the current state of regulations and are lobbying for all Stone shops to become healthier and more efficient. As Daniel can attest to, a clean conscience will be their greatest reward.

“I can sleep at night-time saying we’re doing everything possible to ensure the safety of our employees.”

What are you doing to ensure that your staff stay safe? Email us with your stories – we might just share them next.

Inside a Maverick Mind: Cameron Bishop from Distinctive Stone
Scroll to top